Sexism: Time to stop laughing it off – it’s not funny! 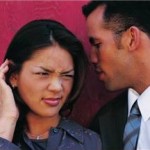 Well, the 8th March is International Women’s Day. And I was just watching the BBC interviewing 3 women from the sporting world talking about sexism. One, a sports columnist at a national newspaper, another a CEO of a football club and the third a racing driver.

I felt emotional after the interviews. And I wondered why.

Well, two of the three women said they “laughed off” sexist remarks. But what does laughing it off mean? Yes, it means we’re not taking it seriously. But it also means we’re not taking sexism seriously! By not naming the sexist remark we are implicitly condoning it – saying it’s OK. By laughing at it, we’re saying that we don’t attach significance to it – that it’s not important enough to say something about.

I found myself wondering why these women didn’t say something when they received sexist and chauvinist comments. Perhaps to avoid confrontation? Because when women stand up for themselves, when we call out a sexist remark we usually bring negative attention to ourselves. We risk angering someone, receiving a further slight – but perhaps more importantly being thought of as difficult, a bitch, or worse – a feminist…

Oh we women have been well-trained. To suck it up and be polite, not to upset anyone, to maintain relationships, be nice. What better way to avoid change – if we don’t fight back? What a subtle method of control it is to make us feel bad, guilty and ashamed when we stand up for ourselves and point out sexism.

It has been hard to write this article. By putting myself on record like this some people (women and men) will read this and think I am a “raving feminist”. That I imagine things. That I overthink it. Silly me, I read too much into things, I over-analyse, I am over-sensitive.

But did you know the dictionary definition of a feminist is simply that you believe in equal rights for women and men? So, yes I’m a feminist – and I hope you are too.

Think about this. If someone made a homophobic remark, a racist remark in front of you – would you laugh it off? You might not cause a scene, but I’m sure that even if you didn’t say something, you would at least tut, frown, walk off or decide to keep some distance from that person. But I bet you wouldn’t laugh off a homophobic or racist remark.

So why do we think it’s OK to laugh off a sexist remark? 50% of the population is female. When someone says something snide or unpleasant simply because they are a woman, it affects all women. It could be you. Or your wife, girlfriend, sister.

When it comes to sexism, there are some things that should clearly be dealt with – like the lack of changing rooms for women at football clubs – it’s like trying to pretend we don’t exist. And sexual harrassment should obviously not be laughed off.

But if we don’t call out the smaller, more subtle remarks and actions – if we laugh these off we are implicitly allowing them. And this means we are contributing to a continuing undercurrent of sexism in our societies.

So, back to the emotion I felt after watching those interviews. The biggest thing was my feeling of powerlessness and helplessness. Because I cannot change the fact that I am a woman. There are people out there who dismiss or belittle someone solely based on their sex. A sex that I share.

But none of us are actually powerless or helpless. We have power in our own life. We can call out sexist or chauvinistic remarks we see and hear – in the same way we would if someone made a homophobic or racist remark.

Yes, it’s particularly tough to call out a sexist or chauvinistic remark. Every time I do it, I feel a little embarrassed and ashamed – I’m making a fuss over nothing. But I do it anyway. Because the idea that women who fight back are bitches, harridans or harpies – is how we are controlled.

And why is it that when someone makes an offensive remark, whether sexist, homophobic, racist (or something else) that the person who calls them OUT feels awkward, ashamed or embarrassed? Shouldn’t it be the other way around?

And finally, what if you’re not clear whether it was a sexist (or other kind of -ist) remark or not? The subtler comments are the hardest to deal with. But you must trust how you FEEL. If you feel demeaned or belittled, then that is your truth. You can simply say, “I don’t know why exactly, but I feel belittled/demeaned by that remark”. If they laugh at or challenge you, don’t give your power away by feeling embarrassed, shrinking or backing down. Simply use the broken record technique. “Like I said, I don’t know why exactly, but I feel belittled/demeaned/your word by that remark.” Make eye contact. Be UNapologetic. Be Strong. Be You!

So this is not a call to arms, but a call to use your words! Next time someone makes a remark you find offensive or upsetting, speak up! Don’t laugh it off – because it’s not funny! Let the other person know it’s hurtful, sexist, homophobic, racist – and unacceptable. Claim your power to make a difference – and remember it’s the person making the remark that should be feeling embarrassed, not you!

If you liked this article on sexism and difficult conversations you may also like:

4 Responses to Sexism: Time to stop laughing it off – it’s not funny!