This Tuesday 8th March is International Women’s Day. What better way to celebrate women internationally than to celebrate this woman who loved to travel and used her position to better people’s lives! Read our inspiring guest post from Ellie Langford Parks about Eleanor Roosevelt: 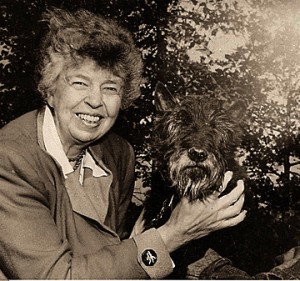 Eleanor Roosevelt (1884 – 1962) was a rebel woman. She is an icon for all women striving for meaningful lives.  Although born into New York upper class wealth and privilege, she experienced hardship as a child losing both parents at young age. She believed herself to be ugly, untalented and lacked confidence. She married young, had six children, was dominated by her mother in law, and was crushed by her husband’s infidelity yet rose to global prominence for her humanitarian efforts.

Eleanor was a social worker, diplomat, educator, writer, businessperson and policy maker.  She had established a career before her husband Franklin D. Roosevelt (FDR) was elected president of the United States. FDR served as President from 1933 to 1945 with Eleanor a key advisor. She redefined the role of First Lady and traveled extensively, earning the nick name Eleanor Everywhere. She promoted the New Deal to alleviate the suffering of people living in poverty. She was a champion for a similar New Deal for women and black Americans, and made important contributions to the civil rights and woman’s movements.

She used her power and influence to promote access in the media and other segregated institutions.  Realizing her newsworthiness, she instituted women reporter only press conferences, ensuring that many newspapers hired their first woman reporter. Her newspaper column My Day ran from 1936 to 1962 and she repeatedly raised key issues of poverty, unemployment and the role of women in society. Her press conferences and newspaper column made it acceptable for women to think beyond the domestic sphere and to participate in the public realm.

In the 1940’s her work helped to establish the United Nations and she was a delegate to the United Nations General Assembly from 1945 to 1952.  She tirelessly worked for justice until her death in 1962. Her enormous impact on US culture is her legacy and she is regularly cited as one of the most admired people of the century.

These are a few of my favourite Eleanor Roosevelt quotes.

Contributing author: Huge thanks to the author of this post Ellie Langford Parks. Ellie is a writer, community organizer, and social justice educator living on Saltspring Island BC. She is proud to be named after Eleanor Roosevelt.

If you liked this article on Eleanor Roosevelt, you may also like: