5 Deadly Terms Used by a Woman! Are You Offended Too?

This was originally a post on Facebook – one of those that people ‘like’ and ‘share’ and it certainly made me smile – but it also left me feeling disappointed and a bit offended. Jokes reveal hidden truths about how we really see ourselves and others – and this one is no different (just start by asking yourself whether it was written by a man or a woman). 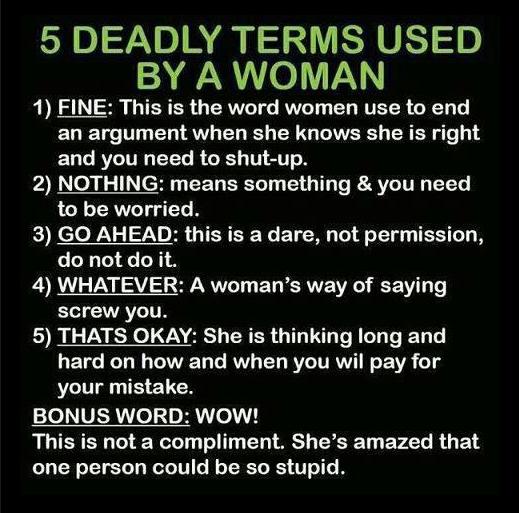 So, what do you think? Although funny it reinforces the message that women are passive-aggressive and unable to communicate directly what they really think and feel. Women are made out to be controlling, sarcastic and vindictive.

But I think this post is damaging to men AS WELL AS women.

Messages like this don’t help men or women understand each other any better, they just reinforce negative stereotypes – rather than helping us change ourselves for the better. Here is a quick summary of what I noticed:

The stereotypes or hidden messages ABOUT WOMEN:

The stereotypes or hidden messages ABOUT MEN:

THINKING BIGGER: Things can’t change until people are AWARE that something needs to change. So, in future, if you see or read something – and feel upset, offended or disappointed, take a moment to read between the lines. Notice what it is that upsets you and why. Then, if you like, you could leave a polite comment explaining why it offends or upsets you – or simply discuss it with a friend. Or like me, write a blog post about it! Who knows where that may lead?

Find this helpful? Why not use the "Share" buttons below
and share with your friends and colleagues!