Super-easy Procrastination Tip – When Would NOW Be a Good Time? 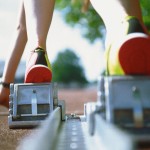 OK, if you noticed the question seems a little odd, it’s because it’s a trick question. Instead of asking when WOULD be a good time? I asked you, when would NOW be a good time?

We all procrastinate sometimes – some of us more often than others. Why? To avoid uncomfortable feelings of course! The fear of being overwhelmed, fear of making a mistake or failure, fear that we can’t handle what we set in motion, fear of not getting it finished, fear of success – to name a few. In fact these fears often play off each other and create a situation where we’re (often unconsciously) terrified to do anything. And so we do nothing!

So, Your Super-easy Procrastination Tip is: “Just GET STARTED!”

Oh come ON! I hear some of you saying – that’s not a tip, that’s OBvious!

But there is a HIDDEN POWER in this procrastination tip. Because I’m not saying start AND finish your activity. I’m not saying to get it done, I’m saying take the pressure off, forget about finishing altogether and just START.

You see there are a gazillion ways (OK a few) you can get started, and sometimes we get all caught up trying to figure out the BEST WAY to start. And because we can’t decide, we put it off and procrastinate.

So, don’t think about it. Just. Do. SOMEthing. Anything. I don’t care how. But BEGIN.

And on that note, as well as this super-easy procrastination tip here are 3 questions to help you:

And yes, planning, research, a phonecall, making notes – all of these count as getting started…

And then – hey – a BONUS procrastination tip! Wanna know the easiest way to get finished? It’s to JUST KEEP STARTING. Don’t even think about finishing. Just keep starting in the way I’ve described above and it’ll be done before you know it.

So, when would NOW be a good time? I think you know the answer!

“The greatest amount of wasted time is the time not getting started.” Dawson Trotman

If you liked this procrastination tip article, you may also like: